TSFF TALK: Audience Development: You are not alone! 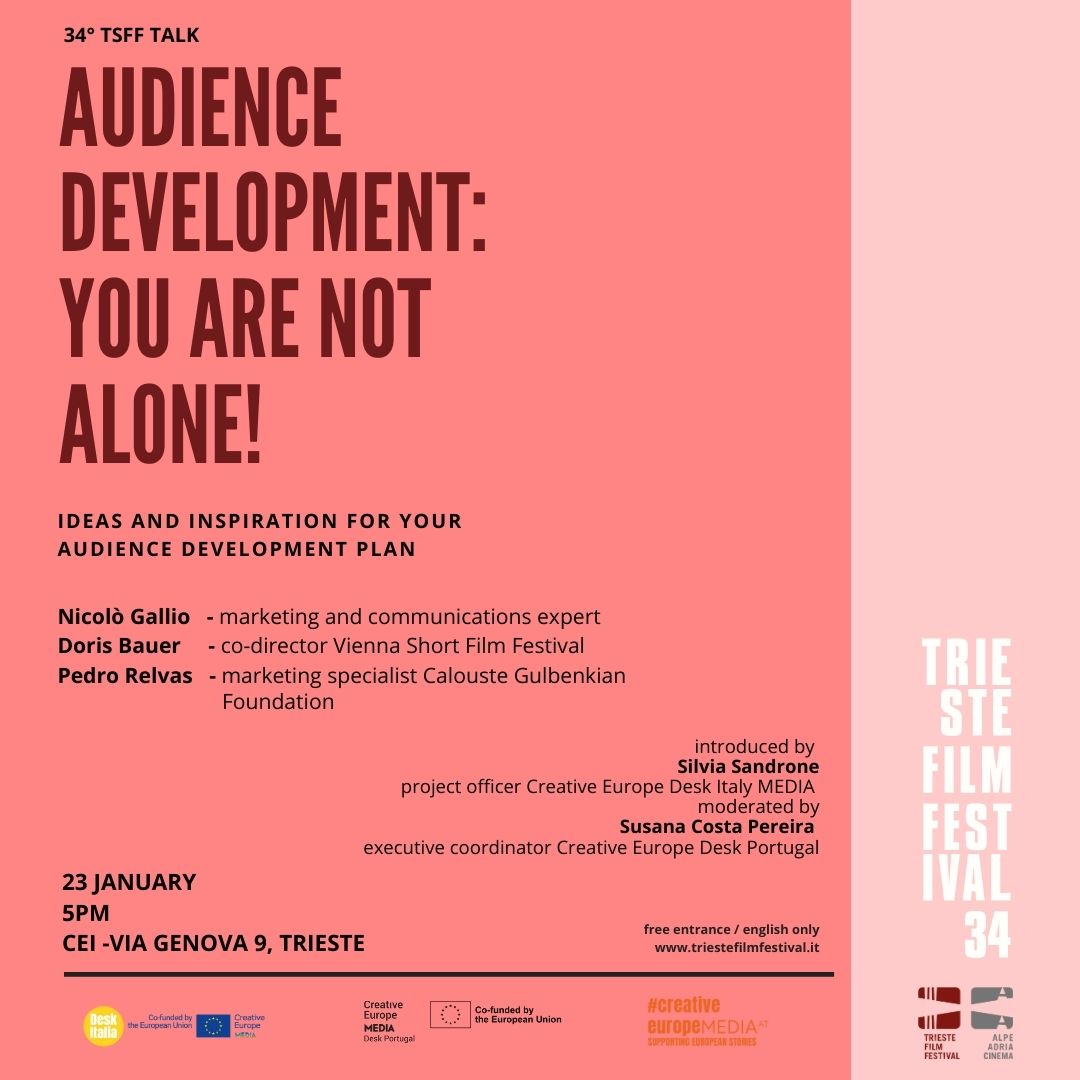 AUDIENCE DEVELOPMENT: YOU ARE NOT ALONE!
Ideas and inspiration for your audience development plan

Do you have a specific target audience for your cultural event you want to reach and not sure how? Do you need some ideas and inspiration? Here we are.
From film festivals to theatres, museums and galleries, audience development has become a priority for cultural players. Nicolò Gallio, marketing and communications expert, will present an overview of approaches and tools to this topic.
Doris Bauer, co-director of Vienna Shorts Film Festival, and Pedro Relvas, marketing specialist at Calouste Gulbenkian Foundation, will present their audience development case studies as well as best practices.

The session will be held in English / free admission.

Nicolò Gallio is a marketing and communications consultant for the media and creative industries, supporting scriptwriters, filmmakers, producers and distributors during the whole life cycle of their projects. A Ph.D. in Film Studies and an alumnus of the TorinoFilmLab Audience Design Programme, he has worked for films, festivals, brands and non-profit organisations. He is also Researcher Strategist at the film marketing agency Alphapanda.

Doris Bauer
Doris Bauer is co-director of the international short film festival VIENNA SHORTS. She studied political science at the University of Vienna and works as a cultural manager and curator. Until 2014 she was director of the open-air summer cinema espressofilm, which she co-founded, and managing director of the DVD rental store Filmgalerie 8½. In 2012, she co-founded the interest group Forum österreichischer Filmfestivals (FÖFF), as whose spokesperson she served until early 2018. Most recently, she was involved in the development of THIS IS SHORT, a European streaming platform for short films.

Pedro Relvas is a marketing specialist at the Calouste Gulbenkian Foundation, in Portugal. A Master’s in Management at Nova School of Business and Economics, with a major in Marketing, he is currently responsible for the Gulbenkian Foundation’s Digital and Content Strategy (covering Art Museums, Music Season, Art Library, Grants and Scholarships, among others), as well as Market and Audience Research.